Columbia are releasing an anthology of fIREHOSE music in tandem with the bands upcoming reunion shws. In this case, 'Anthology' means 'everything they put out on Columbia', plus a handful of outtakes etc. Not their best period, but still a pretty good place to start - especially as it contains the Live Totem Pole EP, which features a raft of awesome live covers, from Wire, Superchunk and Buttholes, to Public Enemy. 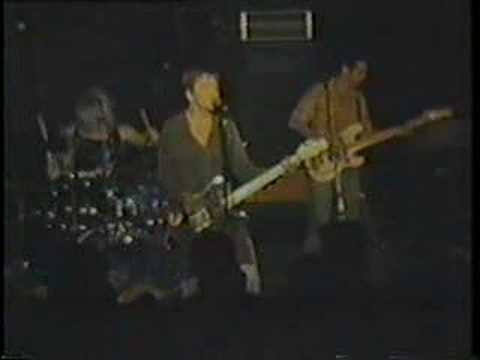 More info has emerged on the forthcoming third LP from Band of Horses, Infinite Arms, due to arrive on May 18th. The satisfyingly familiar cover is by Christopher Wilson, who's portfolio looks like a peek inside my iPod. Buy the image from The Funeral single here.

Looks like old favourite Sub Pop have got the heave-ho however, with the release coming via Brown Records/Fat Possum/Columbia/TopSpin. This duo have really got me stumped. I would prefer not to review this record than make up my mind as to whether I hate it or not. One thing I do know is that lead single That's Not My Name is fucking awesome. I first heard of The Ting Tings on a Later...With Jools Holland show sometime last year. They played this lead single and at first every judgmental nerve in my body kicked into action and I was ready to make a cup of tea until the next proper band came on. But then something strange happened which has started this acute indecision. With Jules De Martino on drums and backing vocals and the ever energetic Katie White up front they seemed like a sugary White Stripes. After the initial tirade of random girls names all the music stopped and White proceeded to craft a live loop of her harmony vocals with various pedals. The drums then picked up once more building to higher and higher levels of noise while all the time White matched this buildup with frenzied shrieks into the microphone. This went on far longer than any pop song should and with this near punk change-up crashing over the live looped harmony the whole song was transformed into something amazing and truly mesmerizing.

Why can't I just leave it there?

Ok, some facts: Tipped in the top 3 of the BBC's Sound of 2008 poll The Ting Tings have actually been around for a while. They formed the band after being dropped from their original label and much of the music, especially That's Not My Name seems to be a valiant reaction to the constrains and turmoil they experienced the first time around. They hail from Salford and put out a few DIY releases last year including the frantic disco-pop number Fruit Machine before releasing album opener Great DJ in March this year.

I can't think of any more facts so I guess I'm going to have to give some sort of opinion. First of all, this really isn't aimed at me, I'm an old bastard who's loving the new Bonny 'Prince' Billy album. So with that said, I find the rest of this record instantly appealing with its unlimited supply of catchy hooks, upbeat rhythm and endlessly energetic vocals. It's realistic in that it isn't trying to be anything more than what it is, and that's 10 flawless pop songs that are meant to be danced to not pondered over. But on the flip side, good pop music often brings with it the 'Pringle' effect. Once you pop, you can't stop, meaning, this shit stays in your head for 'like' ever. In it's unfailing energy comes unfailing irritation, in it's unashamed pop blueprint comes shallow ditties that have instant appeal but zero lasting effect. That's Not My Name is by far the best song on the record but it too has been diluted from its original live incarnation down to an album friendly song that plays all too nicely with the other kids. I wasn't surprised to see Shut Up And Let Me Go - probably the most irritating song here - feature on the new iTunes advert, as We Started Nothing is a bulging Christmas hamper to lazy advertising executives worldwide. But good on them, I hope they make a pile of money out of those soulless rats and make some kids dance along the way. As a soundtrack for his forthcoming Bob Dylan movie I'm Not There, director Todd Haynes has assembled an impressive array of musicians young and old to provide cover versions and re-workings of their favourite Dylan tracks.

Much like the Wylde Rattz project for Hayne's previous rock biopic Velvet Goldmine, supergroup "The Million Dollar Bashers" (featuring Lee Ranaldo, Steve Shelley, Nels Cline and Tom Verlaine among others) back many of the singers, and were put together to bring some cohesiveness to the album. As a cohesive album however, I'm Not There fails conclusively. Clocking in at a whopping 160 minutes, the jam-packed double CD is simply far too long - eclipsing the sprawling White Album and making Red Hot Chili Pepper's 2006 opus Stadium Arcadium seem like a couple of bonus tracks.

Taken as a collection of individual tracks however, the album provides a wealth of ammo for the mixtape masses with more than a few silver bullets in the arsenal. With such great material in the hands of these artists it would have been a tragedy for this album to be a faliure, but cover songs have always been a hit or miss affair - with the artists often taking one of two methods of attack when approaching the material. The most effective method here seems to be the straightforward approach, letting the bands own sound soak through the material. Sonic Youth's understated cover of I'm Not there is a highlight, as are Steven Malkmus' multiple contributions adding only a few restrained theatrics to produce some of his best work.

Black Keys provide one successful modernisation with their fuzz metal version of The Wicked Messenger, but The Hold Steady's version of Can You Please Crawl Out Your Window tries too hard to fit Dylan's square song into the band's story-telling style of a round hole. Not to mention Sufjan Steven's overblown theatrics, which make Ring Them Bells (what else?) smugly saccharine. Eddie Vedder's All Along The Watchtower would make for a live concert highlight, but it sounds pretty straightforward here  - as does Cat Power's solid, but karaoke-like cover of Stuck Inside of Mobile - following Dylan's version down to the tiniest vocal shift, in a way that even he refuses to do in his live show.

Some minor disappointments come from artists who have covered Dylan's work so well previously - such as Pearl Jam's version of Masters Of War or Jim James' superb Billy 4. Jim James covers Goin' To Acapulco on this album, which is a mild let-down when My Morning Jacket could have done a blistering version of something like Hurricane - particularly after they so perfectly blended their own heavy rocking style into Freebird in the woeful Elizabethtown movie.

For all of this, it's the breadth of Dylan's songwriting that is the star of the show - with 70's cowboy-era Dylan coming out particularly well. Calexico's multiple contribution's provide much of that, as do Los Lobos' spirited break for the border with Billy 1. It's when the musicians' really grasp the spirit of the songs that things really work - and while Cat Power's uninspired rendering illustrates Dylan's occasionally drawn out verses, John Doe's version of Pressing On and Ramblin' Jack Elliot's guitar picking on Tom Thumb's Blues provide a celebration of the music itself, rather than just the lyrics.

34 tracks picked from Dylan's catalogue of literally hundreds is in itself quite an achievement, resulting in an album so dense that it's taken me an extra week just to get to grips with it all. If it was actual Dylan versions it might be up their with Mothership in this year's best of (disqualified on a best-of technicality). And in fact, since hearing this album I have drawn up such a playlist, which is working out nicely. 2005's Meltdown: Songs of Experience should have provided a few clues, but Patti Smith's highly rated Horses show at the same festival suggested she still had game.

The New York avant-garde punker returns here with a 12 track covers album, inventively called "Twelve", showing both the roots and modern tastes of the musical legend. Sadly, it's a depressingly familiar affair, with un-inventive renditions of predictable tunes such as White Rabbit, Are You Experienced?, Gimme Shelter or Soul Kitchen.

Helpless is the closest thing to vaguely interesting, mainly because it's such a simple song it seems hard for a good voice like Patti's to drop the ball. Dylan's Changing Of The Guards is passable, mainly as I'm not so familiar with that song. Smells Like Teen Spirit is totally out of touch, while Gangsta's Paradise is just embarrassing.

Unless you like listening to passable karaoke stay well clear.

Recent short film "Waiting for Movement" is going to be screened on Thursday May 5th, at The Fleapit cinema on Columbia Road, alongside another Film London commission "Peace & Quiet" and some other shorts.

Don't forget to vote in the morning.